I have a simple gratitude habit that I have been following nearly every day for three years. I want to share it with you here. 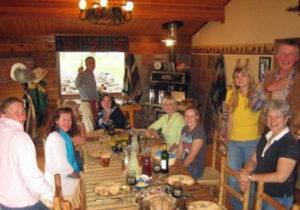 First, let me set the stage.

The Minor Tragedy
The other day I ordered takeout from one of my favorite Indian restaurants for dinner. My family had a tight timeline that night, which meant we would only be together for an hour before everyone had to run off in separate directions.

We picked up the food and drove home, but when we opened the bag we realized that the restaurant had forgotten to include one of the main dishes from our order.

In the grand scheme of things, this isn’t a big deal. Missing half of the dinner that you bought from a nice Indian restaurant in suburban America is a classic example of a first world problem. That said, we had an issue at the moment. Either someone had to drive back and get the food while the others packed for their trip later that night or we had to settle for eating half of the dinner we ordered. It seems frivolous in retrospect, but this is exactly the type of little hassle that can ruin the mood and pull everyone into a negative spiral–especially when you are in a rush.

I wasn’t going anywhere later that night, so I volunteered to drive back to the restuarant and pick up the missing food while everyone else packed their bags for their trip. When I returned 40 minutes later, we finally sat down to eat dinner with about 20 minutes to spare before we needed to get back in the car and leave. Basically, it was a rushed evening.

So, this was the mood in the room–frustrated, rushed, and stressed–when our simple gratitude habit came to the rescue.

The Daily Gratitude Habit
The habit is super simple. Here it is…

When I sit down to eat dinner, I say one thing that I am grateful for happening today.
On this particular day, after the frantic rush of the evening, I said that I was grateful for a short shopping trip earlier in the day because it allowed us to spend time together that we didn’t get to spend later in the evening.

Everyone else contributed their own grateful moment from the day. And in those 10 seconds, the energy completely reset in the room. It was like we all breathed a deep sigh and said, “Ok, that was annoying, but we’re over it now. We live a very good life and it’s time to move on and enjoy the moment.”

Now, let’s talk about why this gratitude habit is so effective. Read more http://jamesclear.com/gratitude-habit