In 1965, a young man named Tom graduated from college with a degree in English.

Soon after, Tom took a job with an insurance company in Connecticut. After working there for seven years, he transitioned to a new role in the industry and started working for an insurance agency. He worked at that insurance agency for the next eight years.

In 1980, he decided to buy a small insurance agency. At this point Tom had been working in the insurance industry for 15 years, but he was beginning to feel an internal pull to do work that really excited him. He had always wanted to write a novel. 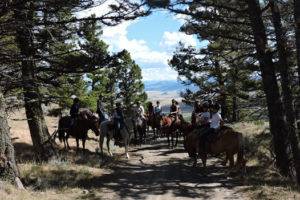 He started by writing in his spare time. Then, he started cutting his work day short so that he would have more time to write. Eventually, he was working on the novel whenever he could find time.

His wife, Wanda, recalled Tom’s early writing years by saying, “He was writing at home every weekend. I told him he should go back to selling insurance.”

In 1984, after working for almost 20 years in the insurance industry, Tom Clancy finally published his first book, The Hunt for Red October.

He was hoping to sell 5,000 copies. By the end of the decade it had sold more than 2 million.

It’s Never Too Late to Reinvent Yourself

There’s nothing special that happens to the people who choose to reinvent themselves and chase their dreams. It’s not any easier for them than it is for you. It’s just that at some point, they choose to do the work. They choose to take action. And they choose themselves.

Reinventing yourself and developing a new skill is hard work. Going from out of shape to the best shape of your life is hard work. Transitioning from corporate desk jockey to proud entrepreneur is hard work. Moving from life-long insurance salesman to best-selling novelist is hard work. And so is pretty much every other goal worth fighting for.

As Clancy says, there’s nothing “mystical” about it. You won’t feel “divinely inspired.” The first steps toward any dream are slow, unsexy, and inconvenient — sort of like writing a novel on the weekends while you’re still running a small insurance agency.

And to further complicate things, reinventing yourself is particularly hard because nobody is going to praise you for it — especially in the beginning. Tom Clancy’s wife told him to “go back to selling insurance.”

The good news is that the path to doing work you love might not look the way you expected, but it can still get you to where you want to go — if you make the choice to try something new.

It’s never too late to reinvent yourself. Read more http://jamesclear.com/reinvent-yourself